Day Is Dying in the West Layout

I dug deep into my stash for the papers to complete this layout, but then I combined them with a brand new challenge from Lasting Memories: their "all around" challenge was to add anything showing direction to your layout, so, since my pictures were taken facing west towards the setting sun, I used the direction of west in my title! I repeated it in my journaling, which is actually the beautiful lyrics to an old hymn. 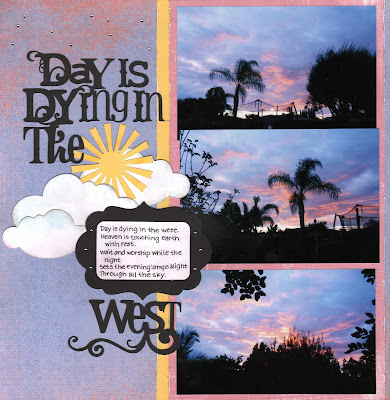 For anyone who is interested, I thought I'd do a little review of CTMH's new post bound albums verses the Pioneer post bound album. I was really bummed when CTMH discontinued their solid color albums a few years ago, but they re-introduced a few new ones this year, so I thought I'd give them a try. Here's what I found.

I had placed my completed pages temporarily in a Pioneer album, and had been disappointed at how rickety the album was. I also had trouble finding extender posts (you can order them online but they seemed a little pricey to me), so I bought some from Recollections that Michaels carried, and they worked okay except I had to replace the whole post since the Pioneer ones won't thread with the Recollections ones. With the extender posts, I was able to jam 31 standard Memory Protectors sleeves plus 13 photo storage pages (similar to Project Life style sleeves) in the Pioneer album, but as I previously mentioned, the album seemed a little rickety. I also hated that you really couldn't use the bonus expansion back (it covers the album's spine) until you had fully completed your album and were positive you wouldn't be adding more pages, since once you hole punched it for a certain size, you couldn't really change it without the first punched holes being visible. Overall, not really happy with the Pioneer album.

I just took out my CTMH album, and the first thing I noticed was how sturdy the cover is. It's probably twice as thick as the Pioneer one. The album wasn't assembled and there were no directions, but it seemed pretty self-explanatory, so I got to work. The album comes with three album posts (Pioneer only has two, another drawback in my opinion), and each one ends with a screw that has a flip out handle to make it easier to screw it back into the post once your album is assembled. After struggling with the screws on the Pioneer and Recollections posts, this was a huge plus in my book! 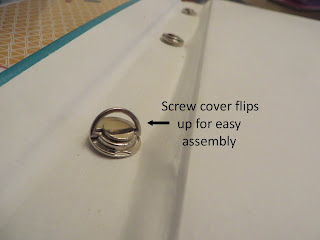 I noticed the posts were a little tough to push through the holes in the album cover and was prepared to be bugged by that, but then I thought it might actually add to the overall sturdiness of the album if the posts didn't have lots of wiggle room. I started adding pages, and managed to transfer all the Memory Protectors and photo storage pages I had had in the Pioneer album into this album. It's a little thick, but even with three spine expanders (the little plastic insert to properly space your pages and make sure your album lies flat), I still had no trouble slipping the back cover onto the posts and fastening the screws, which went on like a dream. For those familiar with my scrapping style, I usually have a little dimension on every page, so that gives you an idea of what can fit in these albums. CTMH doesn't offer extender posts, and the Recollections ones don't fit on the CTMH posts, so you are stuck with the size as is, but I honestly think any thicker and you wouldn't be able to lift the dang thing! The hardest part of the assembly was sliding the spine cover into the openings on the ends of each cover (the fit is pretty tight), but at least I'm assured the spine cover won't slip off, right? One last observation: the covers of the CTMH album are about an inch wider than the Pioneer one, so my page are completely covered, verses the Pioneer one where they were right up to the edge and, due to the rickety nature of the album, even tended to hang out a little as the album shifted around. 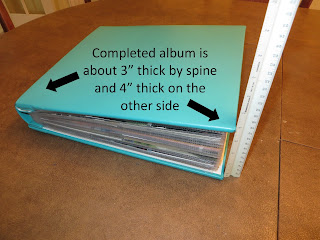 So there you have it, fellow scrappers, a comparison of Pioneer and CTMH albums. I have to say, very pleased CTMH brought back the colored albums, since they win hands down for quality and ease of use in my book!
Posted by Cheryl Even at 9:39 AM 2 comments

I have a confession to make. This past June, I started making an ABC album to give to my son's kindergarten teacher as a thank you for all her hard work with him. Well, a couple things happened to prevent me from finishing the album: I realized I was running out of time and had too many layouts and not enough days to get it done before the last day of school, and the album was turning out so cute I was having a hard time even thinking about parting with it! So I changed tracks, put the album away, and gave his teacher another gift, and decided I would eventually give this to my son as a momento of kindergarten. I finally pulled it out this week and I am determined to finish it before the end of September, so here are two more layouts.

For the S/T layout, I used a sketch from GrandDiva's Creative Corner. I had to compress the elements on my layout since I used an 8" x 8" canvas and my photos are slightly cropped 4 x 6s, but I think you can still see the bones of the sketch. The story behind the tickets is that my son has issues sitting still in class, plus he struggles with impulse control, so his teacher and I came up with a behavior incentive using tickets and rewards. It mostly worked! 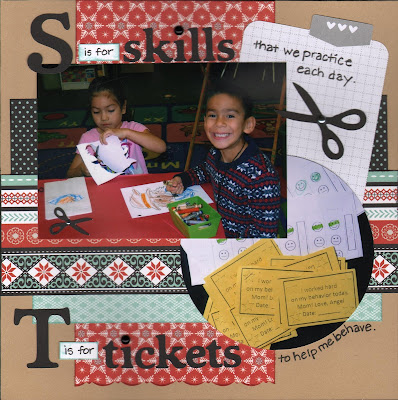 For my U layout, I used a sketch from Let's Get Sketchy. Once again, I compressed the sketch for my smaller format and I eliminated one photo, but this sketch seemed to lend itself to the smaller size quite well. This was my least favorite rhyme out of the whole album, but I just couldn't come up with another thing for "u," so I let it stand. 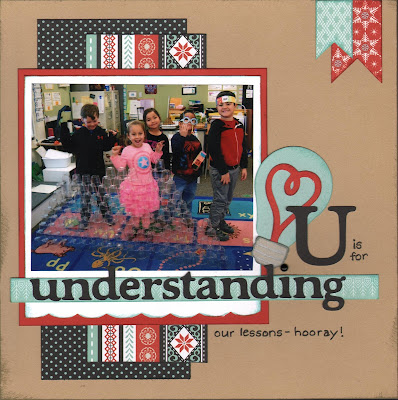 I needed some Halloween inspiration for this layout, so I searched online and found a fun tune from 1964 called "Haunted House" by Jumpin' Gene Simmons. I liked the lyrics about bells ringing and chains clanking, so I added them around my frame and then stamped the title on some banners to make it stand out from the rest of the words. I had lots of fun with the frame, adding a cobweb in the corner (hard to see but trust me, it's there!), the lyrics and puffy shapes around the edges, and finally a die-cut fence and the stamped and fussy-cut owl. 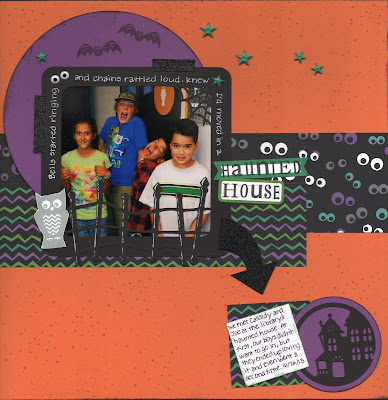 This was one of those layouts that I kept fussing with, pulling things off and trying something different, until I finally decided to just let it be! Hopefully I achieved something resembling my original idea. I had no idea what I wanted for my title, but the Lasting Memories' challenge for this week was the word "up,' and that inspired my title. Thanks, LM! 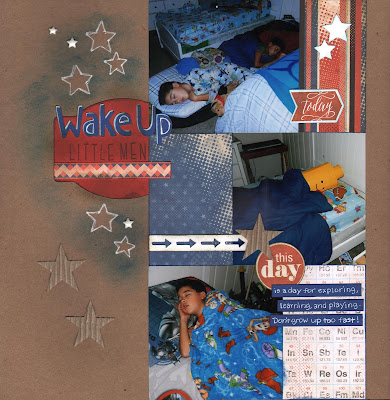 How Many Firemen??? Layout

October 2013 must have been the month for freak accidents, because on top of my younger son cracking his two front teeth, my older son got his finger stuck in a hole in our fish tank lid and had to be extricated by the fire department! As I was trying to think of a title for this layout beside "Stuck Finger," the old rhyme about "Cinderella, dressed in yellow, went upstairs to kiss a fellow . . ." with its tag line of "how many doctors did it take?" flashed through my mind. Since the fire department ended up sending out five firemen, this seemed like a good fit for my layout! 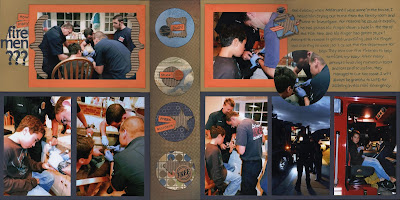 For this month's sketch for Splitcoast Stampers, I experimented with some diagonal lines, a little departure from my usual style. On the sketch, I think it looks daring, but after creating a layout based on the sketch, I kinda think it just looks lopsided. Hopefully someone else will come up with something fabulous that will make me like it more! For my layout, I really didn't want to try to match the bright reds found in two of the photos, so I went with more muted tones. Still working on silencing that inner voice that says it all has to match perfectly! 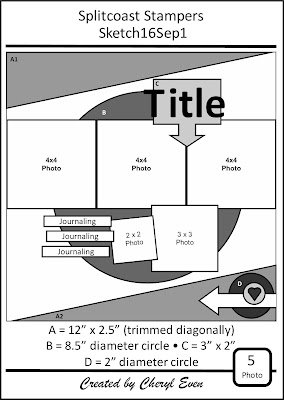 Click here to play along with the sketch!
My layout: 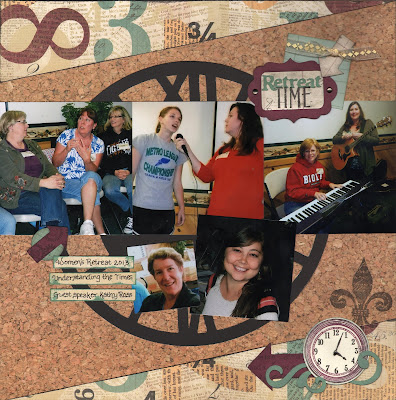 Cheryl Even
First and foremost, I love the Lord and want to serve Him in all I do! I have been married to my college sweetheart Greg for 27 years and am a SAHM to four wonderful kiddos. My hobbies include reading, teaching Bible study, singing, and scrapbooking, and I'm currently learning to play the guitar!

Unless otherwise stated, all products used in my artwork are from Close to My Heart! 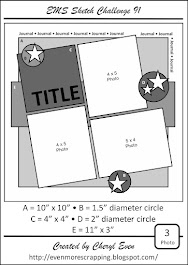 I design for Joy of Sets!

All products used on this blog are from Close to My heart unless stated otherwise.

Search my blog for anything not listed under labels!